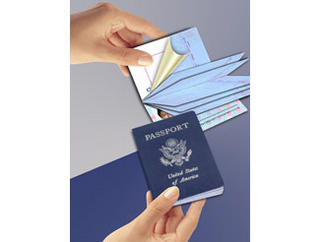 The U.S. government is planning to begin issuing electronic passports to its citizens, which feature a built-in chip that contains information about the passport holder and facial-recognition capabilities. These electronic passports to be out by December this year will be initially issued only through the department. However, by October 2006 domestic passport agencies, such as local government offices and post offices, will also be able to provide them.

The new passport will look similar to the traditional type, but a smart-card chip will be embedded in the back page, that will make it slightly thicker. When swiped across an electronic reader, the chip in the passport wirelessly transmits data to a customs officer’s computer screen. The electronic passport relies on radio frequency identification technology (RFID). If the chip is broken or malfunctions, the holder can still continue to use the passport as a non-electronic passport, and then buy a new one.