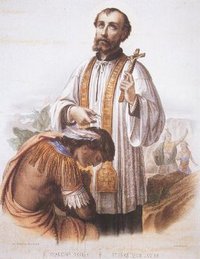 I belong to the Paravar cast. I didn’t know much about it, till I got to this post in WikiPedia. It’s awesome that my cast has a really great history!

Traditionally, the Paravas had been for centuries, Pearl-Divers – until the 19th century, when pearl-oysters in the Gulf of Mannar, between India and Sri Lanka, became scarce. Tuticorin city in Tamilnadu, India, still a stronghold of the Parava community, was the centre of the pearl trade. The Paravas later diversified into fishing, salt-making and other maritime professions.

Paravar also refers to the people living on the coast of Tamilnadu state in India and in parts of Northern and Western Sri Lanka (Ceylon). (In Tamil language and literature, the coastal areas where they lived were called ‘Neythal Thinai’) – The other old Tamil castes, the Maravars (Devars) and Kuravars live in the neighbourhood and in ancient times were believed to be akin to the Paravas. Now, the Paravas are also commonly referred to as ‘Fernandos’. Significant numbers of well-educated paravas, many of whom have diversified into major professions and business also live in the major cities of southern Tamilnadu and in Colombo, Sri Lanka. The Paravas in Sri Lanka (Ceylon) migrated from India during the British colonial days ; many prosper in trade and business in Sri Lanka and now generally speak Sinhala, the language of Sri Lanka.

Paravas were the first whole community in India to get converted to christianity in the mid 16th century. The name ‘Fernando’, a predominant surname and other surnames were acquired from the Portuguese, under whose influence the Paravas came into, in the 16th century. There are as many as 100 or more of these surnames – Fernando, Fernandez, Mascarenhas, Victoria, Miranda, Devotta, De Cruz, De Souza, Gomez, Dalmeida, Vaz, Desoyza, etc., which were given by St. Francis Xavier, other missionaries and Portuguese officers during the 16th century.

In the olden days, the Portuguese called the area where the Paravas (or pearl-fishers) lived as “La Pescaria” – or land of the pearls.